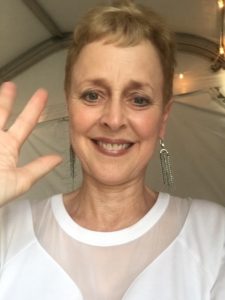 It is hard to pinpoint exactly when I began to have problems with my voice.  I’m a lifelong asthmatic who has been on medication, and has received allergy shots since I was a child.  About five years ago I saw the first ENT who scoped my throat, and he gave me a diagnosis of reflux. He told me my vocal folds were red, and that I was dehydrated. I needed to radically increase my water intake, and avoid food or drink for 2 to 3 hours before bedtime.  I followed his advice to the letter.  My singing voice (I am a classical soprano) improved considerably, and I thought I had found the answer to a lack of clarity in my sound.

At this point I had been on inhaled corticosteroids for about 2 years.  The non -steroidal medication (Tilade) I had been on for years was discontinued in the U.S. and Canada in 2008 because it contained clorofluorocarbons (CFCs) which are bad for the environment.  Patients with allergic asthma were then obliged to use inhaled corticosteroids branded more effective and safe in treating allergic asthma.

Fast-forward another three years. I began to notice an occasional “falling out” in my transition, that place where a singer’s voice passes from chest to head register.  There was no cracking, just an audible “bump” or “dip” that felt unstable.  I modified the vowel, and avoided pushing my voice, singing very carefully in this part of my range.  I’m not sure when I began to notice it, but a pesky phlegm appeared that would not clear.  I suspected that it was my asthma, a logical explanation for the sensations I was experiencing.  Newer corticosteroids were on the market, and I was prescribed Dulera, a combined medication with both a steroid and a long-acting, antispasmodic medication (Formoterol). Four puffs a day were recommended, and I rarely missed a dose.

The reliability of my vocal onset became compromised.  No matter how much I vocalized to warm up for a performance, I was always faced with not knowing what would come out at the start of phonation.  This was particularly true when the phrase began with a vowel, and there was no consonant to initiate the sound.  I had my throat scoped at the Voice Center of Johns Hopkins in September of 2015.  The otolaryngologist told me my vocal folds looked fine, that I just had phlegm, and that I should begin treatment with a speech pathologist.  I caught a recurring flu that month, and at the beginning of 2016, developed a bad case of laryngitis.  When I recovered from all the illness my voice was even worse.  It cracked, and would not clear.  Even my laugh felt and sounded different – not as high or as easy.

I began sessions with a speech pathologist who gave me countless vocal exercises (all of which I could do, but still had the phlegm and the cracking), and monitored my breathing, at one time telling me my breath was labored and anxious. (I had just arrived after having raced around the office parking lot looking for a space, trying to be on time for the appointment!)  After four sessions I realized she didn’t know how to help me.  Meanwhile, I faithfully followed with my daily regimen of asthma medications, saw my allergist regularly, lived a healthy lifestyle, and grew increasingly depressed.  In April I had a chest x-ray. It was excellent. The lungs showed signs of over-aeration, but this is not uncommon for a lifelong asthmatic.  I saw a pulmonologist who, after a battery of breathing tests, told me my lungs were in great shape for a woman my age, probably due to the fact that I was an opera singer.  Basically, I was told there was nothing wrong.  Yet, I couldn’t sing in public, and singing during lessons with my students had become embarrassing, uncomfortable, and disturbing.  In five years I had seen three allergists, two ENTs, an otolaryngologist, a speech pathologist, and a pulmonologist, all of whom had been given a complete list of my medications.

I can understand why medical professionals might prefer a simple solution to a complex problem.  I was asthmatic and highly allergic.  I had a brief history of LPR  (laryngo-pharyngeal reflux).  I was having trouble singing (but that is not life threatening).  I was depressed.  They were trying to help me by tackling one problem at a time.  My allergist listened, and saw a dip on my breathing test, indicating possible vocal cord dysfunction (VCD), but the fact is, none of the professionals made a connection between my symptoms and the potent corticosteroids I was inhaling every morning and evening.  They knew nothing about the side effects these drugs could cause.  When the third ENT saw me for the second time (August 2016) after having put me on proton pump inhibitors for two months with no improvement in what had now become dysphonia, he commented, “I think your vocal cords are dry.  Maybe you should try cutting back on your asthma med.”

Come again? I was shocked, to say the least.  I began an online research project.  Below are a fraction of the findings.

Inhaled corticosteroid (ICS) therapy has become standard in the treatment of asthma.  A common local adverse effect of ICS therapy is dysphonia, which has been reported to affect 5% to 58% of patients.  Although causes of dysphonia associated with ICS therapy have been under-investigated, it may result from deposition of an active ICS in the oropharynx during administration, which then causes myopathy or a mucosal effect in the laryngopharynx.  Use of ICS should be considered during any evaluation of dysphonia —Cesar A. Galvan and Juan Carlos Guarderas

Many patients who have hoarseness related to ICS describe a subtle onset that began months or years after starting the inhaler.  There is increased risk of voice change with higher doses or strengths of inhaled steroid.  It’s often very frustrating when you have established a good routine of daily inhalations and have reaped the rewards of good asthma control but later learn the wonder drug is weakening your voice—James Thompson, MD

Inhaled corticosteroids have become the prevalent treatment in asthmatics.  Hazards to voice are under-recognized.  A total of 38 patients with voice complaints associated with the use of ICS were assessed by 79 strobovideolaryngoscopy (SVL) examinations, 24 single and 14 multiple SVL.  Hoarseness and dysphonia were the primary reasons for referral.

And from graduate student Ramesh Sahrawat’s Master’s thesis in Health Science from the University of Canterbury, NZ, 2010:

Most research suggests that the long-term use of ICS has a negative effect on voice production.  However, the results of these studies are limited because of the reliance upon examining an asthmatic population and not consistently recording the dose prescribed…Therefore, an ideal approach to examine the influence of ICS on voice is to test its short-term effects on healthy individuals, using a specific ICS (Fluticasone Propionate) at a fixed dose (1000 mcg/day). Thirty healthy adults (15 females and 15 males) aged between 18 to 30 years participated in this study.  All participants were non-smokers with no history of speech, language or voice disorder.  No participants had a history of asthma, respiratory illness, hospital admission or inhaler use within the past 3 months.  All participants followed the treatment regime often prescribed by physicians (in Canterbury region) for treating asthma.  Each participant self-administered (inhaled) two puffs of ICS in the morning and again in the evening over a six-day period.  Voice samples were audio-recorded prior to undergoing the ICS regime, at various points during the ICS regime, and at the conclusion of ICS regime.  Each participant’s audio-recorded samples were submitted for acoustic analysis using a commercially available speech analysis system (CSL4300B, Kay Elemetrics, 1994).  Three measures were performed, (1) vocal fundamental frequency (FO), (2) long-time spectral analysis (LTAS) and (3) formant frequency and formant frequency bandwidth.

The result of this study indicates that ICS does have an effect on acoustic properties of voice…in particular, the spectral tilt and first spectral peak of continuous speech samples were found to change from baseline.  The current results are discussed in regard to the phonatory deterioration associated with ICS use – Ramesh Sahrawat, University of Canterbury, 2010.

That was August.  This is what followed:

I immediately cut back my inhaler to one inhalation per day.  This was difficult.  I had resumed allergy immunization therapy (shots), and continued those faithfully, reaching peak maintenance treatment in December.  At the advice of my brother, a teaching emergency physician, I quit taking systemic antihistamines. In September 2016 I began voice study with Cate Frazier-Neely, a trusted colleague I have known for thirty years who specializes in Somatic Voicework™: The Lovetri Method, and other forms of somatic re-education.  Through our work together, I began to address compensatory issues from the years of dodging phlegm, and dealing with increasing weakness, and also began to strengthen muscles and develop coordination all over my body that had atrophied.

And this is where I am now:

I stopped all steroid inhalation.  I am practicing daily, and my voice is gaining the strength it had years ago.  I do wake up with a slight wheeze, but after an hour or so, it diminishes.  Recently I sang a solo at the church where I sub, and my voice felt nearly like its old self.  I received many accolades.  I have been asked to sing two more performances in the next month, one song only.  I am taking it slowly…

I need to speak about this journey.  I have lost years of quality singing, not knowing what was wrong.  My singing voice has been my travel companion throughout my life – it is not merely my profession.  The gradual weakening of my singing voice affected my mental, emotional, and psychological health.  Losing one’s voice is a grave loss—there are no words to describe the grief it brings.  Perhaps if the medical professionals who treated me had known about these adverse effects they would have sought alternative therapies for me, or at the very least, lowered my dosage of ICS.  I believe the discontinuation of non-steroid treatment for asthma in the U.S. should be reconsidered.  As it now stands, I am on maintenance level allergy injections monthly, one dose of Singulair (Montelukast) nightly, and only occasionally do I use my emergency inhaler.  This treatment is working well.  I write to warn singers of all varieties, professional and non-professional, and others whose livelihoods depend upon their voices, of the negative effects of inhaled corticosteroid treatment on the voice.  I also write to draw the attention of physicians who prescribe these medications, as well as the pharmaceutical companies and retailers who produce and profit from them, to the well-documented adverse side effects of long term, sustained usage to the human voice.